The development of the safety bicycle

People have been debating for over 120 years who was the 'inventor' of the safety bicycle. I put my cards on Mr. Lawson, who in 1876 patented the name 'safety' and developed a lever driven safety, which was built on a small scale by Singer. In 1879 he built a chain driven rear-wheel drive safety, called 'the bicyclette'. This one was built by Rudge. The story goes that the French took their word bicyclette from this bike, which is at least a nice story.

In 1884 Humber built a safety, BSA built a safety and Rover built a safety, that after a few conversions became the first commercial succesful rear wheel driven bicycle. In 1886-1888 all producers started to make their own safeties, and they really had to 'invent' the perfect shape of this bike. These early bikes had a block chain. I made a page about a typical chain from the period 1884-1892, please click here.

In these late 1880's, there are many different types of frames and versions. But we can see a few â€˜periodsâ€™.

1884-1890: many types of frames, in which the diamond frame (without seat tube) and the simple cross frame were leading. The cross frames tended to break and every year they got more stays. At first between bracket and rear axle. Second, between bracket and steering head. And third, between the head an top of seat tube. 1890 brought a lot of semi-diamond frames on the market. Most bikes still had the pivot steering, that was directly taken from the penny farthing. All bicycles were fitted with narrow solid rubber tyres, which gave no comfort at all.

1890-1891: the diamond frame takes over, in these first years we see a short bicycle, with a slightly bent seat tube. In 1891, most bikes get a real ball head (or cheaper models a socket head without balls). Solid tyres are still popular, but people could also choose cushion tyres: broader hollow tyres that give a little bit more comfort.

1891-1895: most factories were still making the crossframe as their cheaper model. But the diamond framed bike with a longer frame and straight seat tube was the new standard. On these bikes, the front wheel often was bigger than the rear wheel, for instance 30 inch front, 28 inch rear. The pneumatic tyre was fitted on the more expensive models, but solid tyres and cushion tyres offered a cheap alternative.

1895-1897: all bikes had pneumatic tyres by now. The newest models had a fully horizontal top tube. In fact: the modern bicycle was born. I decided not to list these newer bikes on my website â€“ Iâ€™ve got to draw a line somewhere ...

NEW: how did people look at safety development in february 1892?  Click the illustration to download a page of Cycling News, 1892.  Copy comes from the Velorama museum, Nijmegen, Netherlands. 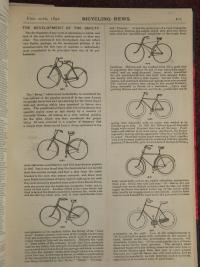